The Old School Building
On May 25, 1896, voters approved the funding and location for Cranbury’s first consolidated graded school. Bonds were sold on June 25, and six construction bids were received by the Board of Education in July. On July 31, a special meeting of the Board of Education was held, and the construction contract was awarded to William W. Walker, who bid $4,249.91. Mr. Walker’s bid was more than $100 less than the next lowest bid, and more than $500 lower than the highest bid. At that same meeting, Mr. Walker gave a speech in which he tendered his resignation as President of the Board of Education. Construction began in August, and the cornerstone was put in place in September. The building was completed in January of 1897, and the school opened on January 25, 1897, with an enrollment of 159 students. The Finance Committee of the Board of Education reported, “Our hopes for a Graded School have been realized. The Building having been erected of good materials and with our best judgment according to our means.” The total cost of the school, including lot, furniture, steam plant, painting, fencing, grading, insurance, legal services, bond sale, surveying, and cleaning, was $7,347.76.

The school was dedicated on February 22, 1897, which coincided with the George Washington Celebration and included a parade, a dedication ceremony, the Corona Dramatic Club’s evening performance of the play, “Bound by an Oath,” as well as music by Goodwin’s Orchestra. Money from the sale of about 400 play tickets was presented to the school to be used for improvement to the school. That same day, the Corona Dramatic Club presented the bell, which still hangs in the tower of the building. The bell was made at the McShane Foundry in Baltimore, Maryland. 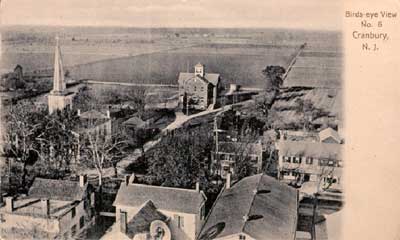 The school replaced the North and South Cranbury Schools, which were the two village schools. They opened with four rooms, which housed a Primary, Grammar and High School Department. An Intermediate Department was added later that year. The school grew with the closing of two of the township schools: the Cranbury Neck School in 1903, and the Wyckoff Mills School in 1910. A south wing with two rooms was added to the building in 1906 at a cost of $1,500.

In 1906, members of the Cranbury High School Alumni Association purchased an E. Howard Town Clock for the clock tower of the school. The clock was purchased with money from fundraisers involving the whole community. In July, 1928, the Cranbury Press reported, “The Town Clock has been lighted with electric lights so that the time will be visible day and night.” In the spring of 1976, the clock face was rebuilt as part of the restoration of the Old School Building. In 2001, the clock was completely restored with funds by Cranbury Landmarks, Inc., and the Cranbury Historical and Preservation Society.

After the 1967 addition, the 1896 school and its 1906 and 1922 additions were no longer used for classes. A group of citizens, concerned that the building, which was in need of repair and would be torn down, organized a group called Cranbury Landmarks, Inc. They worked diligently to raise funds and obtain grants to save and restore the building. On May 6, 1971, the Old School Building was registered as a State Historic Site , and on June 21, 1971, it was registered as a National Historic Site. Cranbury Landmarks, Inc., coordinated the building’s restoration in the 1970s and then managed it as a community arts and recreation center for non-profit groups through 1990.

In 1973, Cranbury Landmarks, Inc., applied for a grant from the Eva Gebhard-Gourgaud Foundation. The Foundation provided a donation for the refurbishment of a room in the Old School Building, which would be dedicated to cultural programming. This room became, and still functions as, the Gourgaud Gallery. 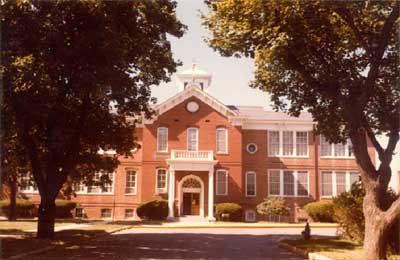 In 1998, Cranbury Township obtained the building from the Cranbury Township Board of Education. Aided by a grant from the New Jersey Historic Trust in the amount of $529,035.00, renovations to the Old School began in January, 2000, and were completed in early 2001.